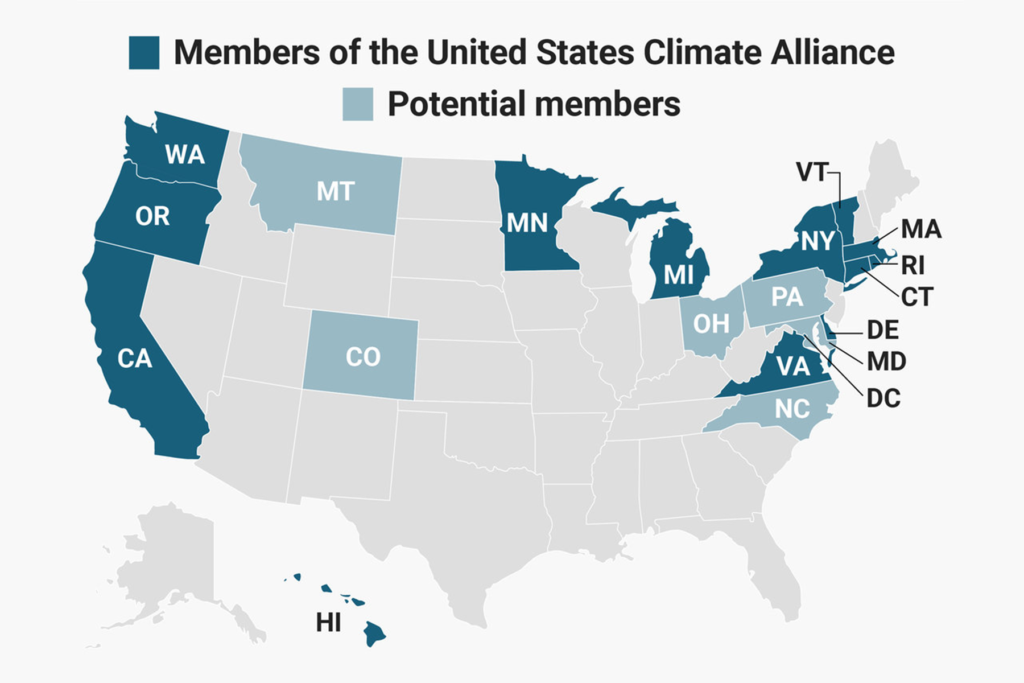 President Trump announced on June 1st that the United States would withdraw from the Paris climate agreement, thus fulfilling a major campaign promise but raising concerns around the globe about efforts to curb climate change, as well as concerns by U.S. corporates about the significant potential for missed economic opportunity.

In response to Trump’s recent announcement, many states, cities, and over 900 businesses have established the “U.S. Climate Alliance,” a group aimed at keeping the U.S. on the right track environmentally by reaching goals promised under the Paris Agreement. Fourteen states and several dozen city mayors have joined the cause.

The Alliance has asked the United Nations to have their combined climate efforts count as America’s contribution to the international accord. These member states, cities, and organizations now account for about a third of the U.S. population. According to Michael Bloomberg, who has been leading the U.S. Climate Alliance efforts, the overall actions of this third will match or exceed what the country pledged under the Paris Agreement. World leaders, many of whom spoke out against Trump’s decision, have voiced their desire to work instead with the U.S. Climate Alliance.

Many members of the Alliance believe that allowing the renewable energy industries to thrive is a better bet for Trump’s job creation goals. In 2016, the solar industry created more jobs for Americans than any other energy industry, including coal (The New York Times). 2016 also saw the most solar installed in the U.S. to date, and solar installations haven’t slowed down in the first half of 2017.

Businesses now have both the opportunity and obligation to fill the void of environmental leadership if the federal government chooses to act slowly, and/or deny science-based physical realities. Solar energy, as part of a company’s renewable energy matrix, can play a key role in maintaining the American contribution to the international agreement, while also providing economically accretive opportunities and meaningful future energy price risk hedging solutions.