The Takeoff to a Sustainable Future: Solar and Airports 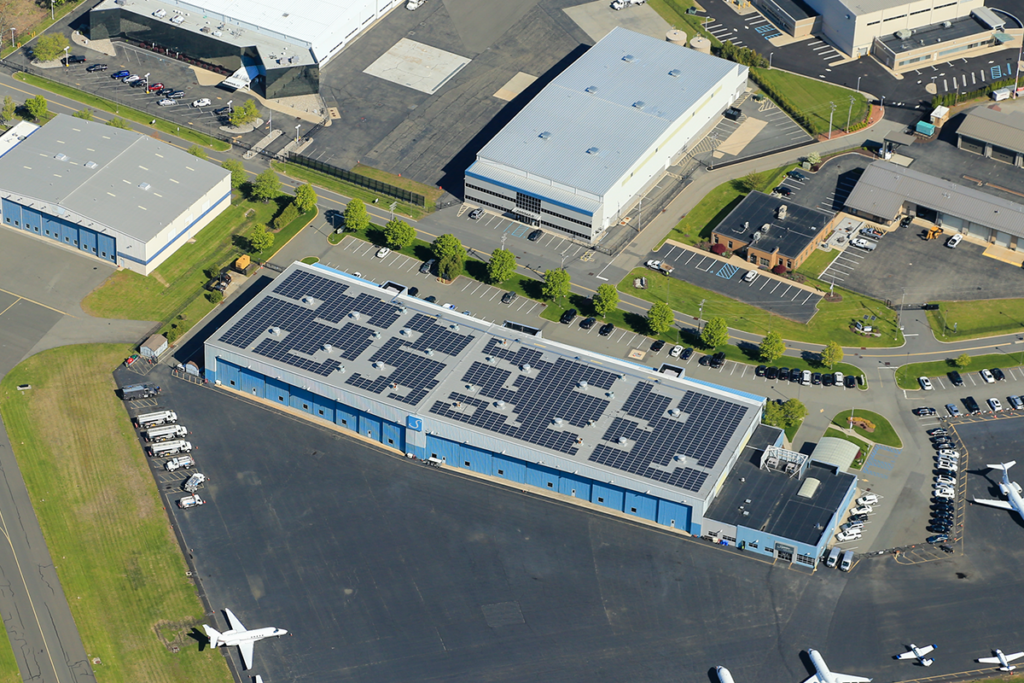 Many airports and facilities near airports have sprawling footprints and make excellent candidates for rooftop solar. Solar systems are a versatile energy technology that can be adapted to suit a variety of locations. Depending on the location, a solar developer must take different criteria into account when designing the system. One relevant concern for rooftop solar on or around airports is the analysis of reflected solar irradiance, otherwise referred to as “glare” from the solar panels.

The effects of glare at an airport are especially important to consider for pilots and air traffic controllers who need good visibility at all times when operating and directing airplanes. While solar panels are less reflective than many materials already found at airports, including metal roofing and snow, the Federal Aviation Administration (FAA) takes any potential for glare very seriously. They have mandated that solar developers submit a “glare study” to confirm that the installed system will not have any negative effects on airport operations.

Currently, there is one software tool approved by the FAA to quantify the glare from solar power installations at airports. By inputting data for various parameters, including array orientation, tilt and height above ground, solar developers can use the software to estimate the severity and amount of glare from the solar array throughout the year.

The FAA also uses the Solar Glare Hazard Analysis Plot, which graphically represents the standard for measuring the ocular impact of solar glare (see graph below). There are many factors that determine the amount of light reflected off of solar panels: time of year, cloud cover, orientation of the panels, panel reflectivity and geographic location among others. Solar panels are constructed to absorb as much light as possible to increase power efficiency, but their glass outer surfaces can reflect light when it hits at low incident angles (the angle deviating from perpendicular to the surface of the panel).

The graph divides glare into three distinct categories from low to high impact: green, yellow and red glare. The FAA defines “green” glare as having a low potential to cause after-image (e.g. the visual effect of floating spots after a bright camera flash). The FAA mandates that there can be no “yellow” or “red” glare in an airplane approach area, which constitutes a specified area around an airport runway, and that there can be no glare whatsoever received at the Air Traffic Control Towers (ATCT).

There are a few simple ways to overcome glare when it poses an issue. One such way is to manipulate the tilt and orientation of the arrays to change the angle of reflectivity. In some cases, even a minor tilt change can completely remove the occurrence of glare on the targeted observation point. Another possibility to consider is applying an anti-reflective coating on the surface of the solar modules. This option can help significantly reduce, if not eliminate, the glare. While glare is an important consideration, we rarely see it impact the viability of a project.

At PowerFlex, we have a team of knowledgeable and experienced professionals with many years of working in the industry. Our engineering and project management teams have deftly handled the obstacles of rooftop solar at various airports in the U.S. for Signature Flight, as well as for companies, such as Rothco and Ricoh, with facilities near airports. If you have further questions and you’re thinking about going solar, contact us today.