PowerFlex Partners with Swiss Re, RE100 Founding Member 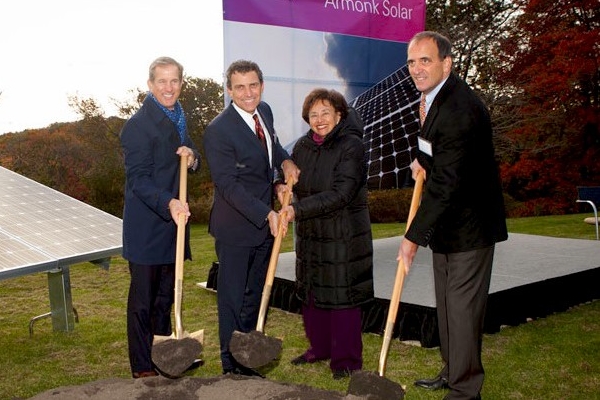 On Wednesday, October 26, the leading reinsurance provider Swiss Re, a founding member of the RE100 initiative, broke ground on a 2.7 MW solar system at their United States headquarters.  Over 100 people attended the ceremony, which took place on the patio of Swiss Re’s Armonk corporate campus.  PowerFlex is honored to partner with Swiss Re to develop this marquee solar project, the largest in Westchester County.

Eric Smith, the CEO of Swiss Re Americas, spoke briefly about the company’s plan to make their operations 100% renewable and described Swiss Re’s efforts to lead the fight against climate change by example. Their Corporate Real Estate and Logistics team explained how Swiss Re is reducing their carbon footprint while also reducing their energy costs. Representative Nita Lowey, the Congresswoman from New York’s 17th District, also participated in the groundbreaking.

The 7,700-module system will occupy 10 acres of the 127-acre Swiss Re campus. The energy produced will offset over 60% of their total electricity consumption at the Armonk campus and will avoid nearly four million pounds of carbon dioxide every year.

Many Swiss Re employees attended the celebration and expressed their excitement to be going solar and their pride in working for such a progressive company. Swiss Re is a founding member of RE100, a group of 81 powerful corporations who have committed to going “100% renewable” by 2020. IKEA, Google, Facebook, and another PowerFlex client, Bloomberg L.P., are also members of this elite group working to increase the use of renewable energies considerably. Swiss Re currently obtains 85% of its global energy from renewable sources and has existing solar systems installed at its Swiss, Italian, and British offices.

As a part of PowerFlex’s employee development program, our Engagement and Execution Analysts teamed up with a MaxSolar Technician to build the temporary array that was used as a backdrop during the groundbreaking.

Want to learn more about going solar? Contact a member of the PowerFlex team today!